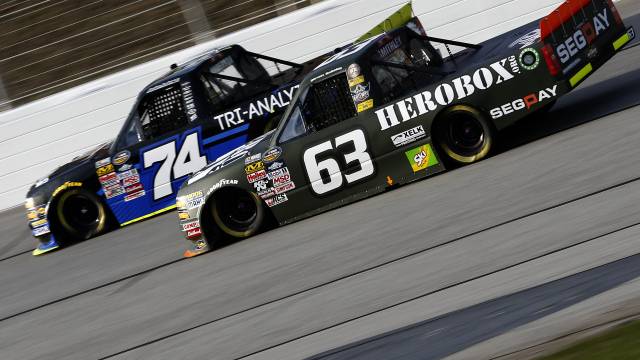 Hampton, GA February 28, 2015—This past Saturday Georgia native and avid HeroBox supporter Garrett Smithley hit the Atlanta Motor Speedway for his NASCAR debut. Smithley competed in the Camping World Truck Series with 30 other drivers, finishing 18th. Ryan Housley, our executive director, expressed his excitement over Garrett’s first race, stating that “HeroBox is very proud to partner with Garrett Smithley as he makes his NASCAR debut in the Camping World Truck Series. Garrett is an avid supporter of our troops and we are honored to consider him an ambassador for our organization. His support for us carrying our banners in the ARCA (Automobile Racing Club of America) series in prior years at Pocono International Raceway and Kentucky Speedway was just great. We hope many will join us in supporting Garrett and our organization as he raises awareness for our military veterans and troops in the #63 HEROBOX.org Chevrolet.”

Smithley and HeroBox also invited 15 Atlanta area veterans to the Atlanta Motor Speedway as VIP guests to experience the thrill of the race and celebrate with Garrett. Smithley commented on his new HeroBox truck, saying that it will “be presented in full military camouflage green to represent HEROBOX.org and all that they do to help serve this country’s active duty men and women as well as veterans of our armed forces” continued Smithley. “I am so proud and honored to be in a position to create awareness for such a worthy cause.”

From our family to...

Support our Heroes. Be a Sponsor for Those in Need.

Register Now Or Donate For Cause